Honors include two M&A Atlas Deals of the Year awards, finalist for M&A Atlas’ Boutique Investment Bank of the Year, and an honorable mention from Mergers & Acquisitions 2022 Middle-Market Deal of the Year.

We kept the tradition of honoring outstanding firms, deals, and dealmakers from the lower- and middle-market transactional communities. The winners exemplify excellence for executing transactions during very competitive deal activity of the past year.

Mergers & Acquisitions 15th Annual Top Middle-Market Deals recognizes dealmakers that excelled in dealmaking, setting the gold standard in the middle market for deals that closed between January 2021 and February 2022. Ascend was one of ten technology deals selected for an award receiving an honorable mention for Government Technology Mid-Market Deal of the Year as the exclusive financial advisor to Municode on its acquisition by CivicPlus. The awards will be published in the May/June 2022 issue of Mergers & Acquisitions, and recipients will be honored at the 2nd Annual Dealmakers Summit held on November 3 in New York City.

M&A Atlas Awards—GovTech & Services Deal of the Year
Municode initially hired Ascend in a buy-side capacity to develop a comprehensive, end-to-end M&A strategy. Over the course of the engagement, the Ascend team developed an in-depth familiarity with Municode and what was important to the shareholders–culture, people, and vision. As Municode began entertaining a sale, they hired Ascend as their sell-side advisor.

Ascend closed the transaction with CivicPlus and Insight Partners in under 45 days, achieving a win-win-win partnership. The negotiated deal accomplished all goals set by Municode’s shareholders—an incredible cultural alignment, a shared strategic vision, an environment where employees and management continue to thrive, and a compelling valuation and structure. Furthermore, the acquisition was transformative to the GovTech marketplace creating an organization that serves over 7,000 municipalities and one of the largest players in the space.

Eric Grant, President & CEO at Municode, said, “We wanted to be confident that we were doing the right thing for our business, our clients, and most importantly, our people. Ascend’s people-first philosophy was the perfect fit for us. They not only understood how to position us in the market to ensure an exceptional outcome, but also that the number one priority was finding a partner who respected and valued our team.”

The ShadowDragon team experienced tremendous growth without a formal sales effort demonstrating the value of their cybersecurity solutions. A hacker at heart, Daniel’s true passion lies with innovating versus running the business’s day-to-day operations. He understood the need for greater business operational knowledge to grow faster and accelerate innovation to help customers proactively respond to even the most advanced threats.

Ascend advised Daniel until the time was right, shepherding him through the entire lifecycle of the transaction from the business perspective and helping him personally think through what he needed to do to prepare for the transaction and beyond. Clemens commented, “Going through the M&A process requires trust and someone that walks alongside you to help navigate the complexities. Working with Ascend made the experience less overwhelming as they provided guidance on all of the areas that I didn’t have any clue about, while pushing our team to keep up the pace to the very end.”

“We founded Ascend with the vision of creating a new paradigm in M&A,” said Eric Parekh, Managing Director at Ascend. “One that humanizes investment banking and places a high value on leading with integrity, maintaining good relationships, and simply doing the right thing…all while driving value with a sophisticated, data-driven approach. We appreciate Global M&A Network’s recognition of our 2021 efforts and congratulate Hyde Park Capital Advisors on their win.” 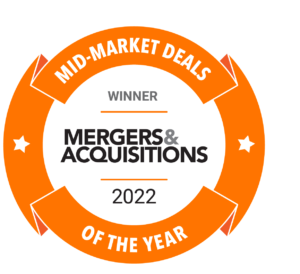 Mergers and Acquisitions—Government Technology Mid-Market Deal of the Year (Honorable Mention)
Ascend’s expertise and relationships in both GovTech and Software were foundational for the success of Municode’s acquisition by CivicPlus. Navigating complex positioning points while tenaciously negotiating key deal terms enabled Municode to optimize its sale process and close the deal quickly.

“We’re thrilled to be honored by Mergers & Acquisitions for our role in Municode’s acquisition by CivicPlus,” commented DJ Palmer, Director at Ascend. “Municode is a natural addition to CivicPlus’ growing platform of technology solutions for the civic community. Both companies share a strong culture and commitment to elevating citizens’ perception of local government through positive digital civic experiences. We were proud to leverage our knowledge and relationships within the GovTech space to find Municode an ideal partner.”

Ascend Advises Interware in its Acquisition by Avenu

In the News, Our News